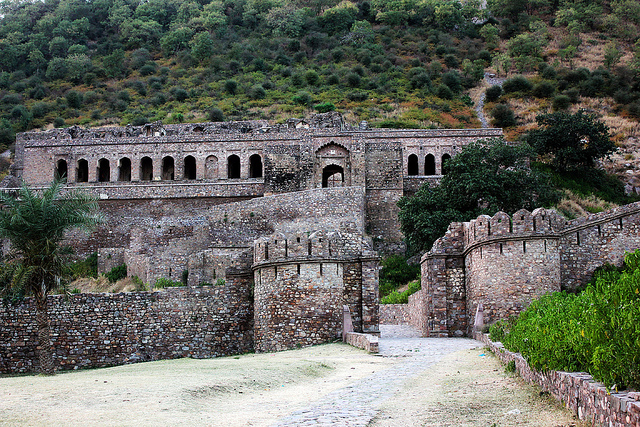 India is a country that goes far back in time, has been conquered and ruled by a huge number of Dynasties, witnessed a lot of battles and has numerous fascinating stories to tell. Being handed down through generations, a huge number of these stories have taken on a mysterious and supernatural form and picked the curiosity of people of today even more. It is said that the curiosity to know the unknown is what makes a Daredevil.

If you are a true daredevil, check out these ‘haunted’ places in India for a heart-stopping experience:

If you are embarking on a ghost-hunt, the best place to start with is the 200 years old Lothian Cemetery in Delhi. As the saying goes, the spirits of the dead roam around in cemeteries at night. The Lothian cemetery is no exception indeed. People who have dared to visit the cemetery claimed to have seen a headless ghost roaming around holding his head in his hands. The ghost is said to be the spirit of an Englishman, Sir Nicholas, who had committed suicide by shooting himself in the head after being refuted by his Indian lover.

The LambiDehar Mines on the remote outskirts of Mussoorie in Uttarakhand has been closed for a long time. Half a million miners had died in this mine due to improper mining techniques. People who happened to be nearby during the night say that they heard strange sounds emanating from the area. There have also been several reports of accidents like trucks going overboard and a helicopter crash near the mines. The villagers claim that a witch lives there now and goes down the hill every night and is said to have claimed several lives.

From Public Domain, via Wikimedia Commons

The Aleya Ghost Lights, also known as ‘Will-‘o-the-wisps”, are strange lights seen in the swamps and marshy areas in West Bengal. It is a belief among the local fishermen, that these lights are a reflection of the spirits of fishermen who had lost their lives while out fishing. The people of these areas say that those who approach these lights die. So they believe that the spirits actually appear to warn them to stay away from some impending doom!

The Shimla to Kalka railway line passes through more than a 100 tunnels cut through the hilly terrain. Out of these, Tunnel No. 103 built in 1903, has been reported to be haunted by a ghost and also has a story to go with it. The responsibility of building the tunnel was given to Colonel Barog during the British Era. Due to some error, the tunnel was not built according to the pre-meditated design leading to the colonel being fined. Humiliated, he had committed suicide in the tunnel and his spirits are said to still live in it.

The small lake at Roopkund in Uttarakhand, discovered in 1942, definitely makes for a ghastly sight. The lake is strewn with over 200 human skeletons believed to be from ancient civilization that dates back almost 1200 years! There have been many theories on how these people died, but the latest report goes that they were caught by surprise by a severe hailstorm. There has been no report of any ‘supernatural activities’, but the sight of the skeletons itself makes the visit a jaw-dropping one.

GP Block in Meerut, Uttar Pradesh, is an abandoned weed-covered apartment building that stands in a desolate area and is well-known to be haunted. The local people say that the ghosts of its old residents still live in the building. Ghostly figures of men have been said to be sitting on the rooftop playing cards and drinking beer and a woman clad in red clothes have been seen to enter and leave the house. The area is engulfed in an eerie silence and the people of Meerut tend to avoid passing the building and take different routes while commuting.

Photo by A Frequent Traveller, CC BY 2.0

The ancient Fort in Rajasthan, the Bhangarh Fort dating back to the 17th Century, is known to be the most ‘haunted’ place in India so far. According to history, a wizard named Singhiya who practiced Black Magic had fallen in love with the Princess of Bhangarh. After being refuted by her, he fell into his own trap and was crushed to death by a boulder. It is said that the spirit of this wizard still inhabits the corridors of the fort in search of his beloved princess.

The Dumas Beach is a strip of black sand along the shore of the Arabian Sea in South-West Surat in Gujarat. Despite being a well-known tourist attraction, the beach has also made a name for being ‘haunted’. As night falls, the deserted beach takes on a mystic feel with the eerie silence broken by the splish-splash of waves and whispering sounds that came from nowhere. There has been reports of people gone missing at the area at night. The fact that a part of the beach is used as a Hindu cremation ground adds more thrill to the eeriness of the beach.

The D’Souza Chawl in Mahim, Mumbai is a 5-storeyed building said to be haunted by the ghost of a dead woman. There is a well in the building complex that is the crux of the haunting story. The story goes that once upon a time, a woman who lived in the building had fallen into the well and drowned in the water. Since then, the locals claim to have seen the figure of the woman walking around the building campus.

The Shaniwarwada Fort in Pune, the residence of the Peshwa Rulers in the 17th Century has an interesting story behind its haunting. History says that a young prince was murdered in the fort premises, his body cut into pieces and thrown into the nearby river. Since then, the people in the locality have heard the prince’s blood-curdling screams for help coming from the fort on every full-moon night!

If you are in search of some thrilling, bone-jarring experience and keen to go ghost-hunting, India surely has no dearth of places that will keep your adrenalines flowing!

Scroll back to top